Obesity in dogs and cats is a major health problem. Research conducted in North America, Europe, and Australia found that between 22 % and 44 % of animals were obese.

Obesity in dogs and cats significantly increases the risk of health problems. These problems include, diabetes, orthopedic disease, urinary disorders, reproductive disorders, cancer, skin diseases, and increases complications during routine surgery, such as neutering. These conditions not only shorten the expected lifespan of the animals, but also reduces their quality of life, meaning obesity in cats and dogs can cause significant suffering and welfare issues.

Addressing obesity begins, firstly, with a discussion with your vet and weighing your animal. Then a Body Condition Scores (BCSs) is assigned, which has been developed for both dogs and cats and uses a number of categories, ranging from ‘emaciated’ to ‘severely obese’. Then changing to a balanced feeding regime which is constantly reassessed until the animal is back to a healthy weight, with all snacks and table scraps eliminated. Regular exercise and other activities will also help to reduce and prevent your animal becoming overweight. It is particularly important in the case of cats to find ways of engaging with them that are not linked to feeding, for example through various forms of training and playing, especially if they are not allowed outdoors. 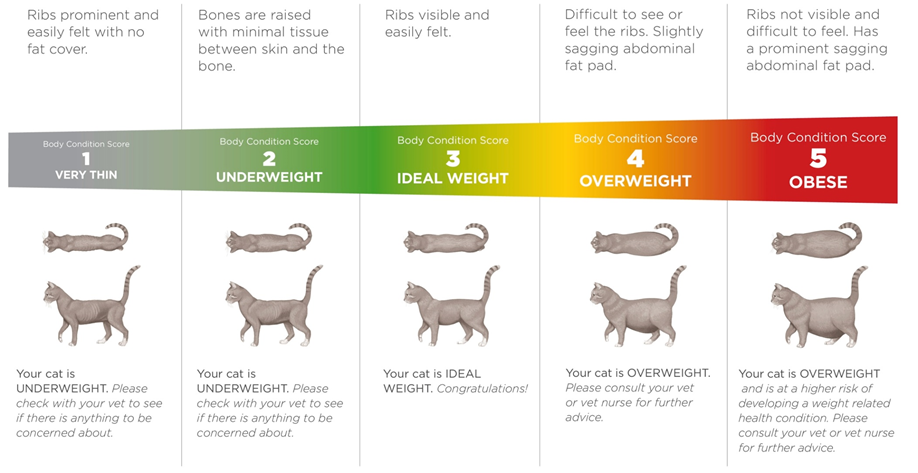